Holger Thorsten Schubart
Fermilab Neutrino Beams Will Pave the Way to Neutrinovoltaic Energy
At the Fermilab DUNE (Deep Underground Neutrino Experiment) project, the U.S. Department of Energy plans to collaborate with top energy scientists from around the world to send the world’s most powerful neutrino beam to a sister station at SURF (Sanford Underground Research Facility) around 1,000 miles away through the Earth. This experiment
Read More
Neutrino energy will fuel the coming consciousness Renaissance
It’s clear that a sea change in human society and culture is rapidly coming. From automation to artificial intelligence, things are changing so quickly that it’s unclear whether the human psyche will be able to keep up. To embrace the healing power of our new technologies, we must divest ourselves
Read More
We knew neutrinos have mass – Now we know what they weigh
Ever since the 2015 discovery that neutrinos have mass, scientists around the world have been scrambling to uncover the secrets of these ethereal particles and their newfound energy-generating potential. For the first time, a recent experiment in Germany has determined the maximum upper limit of neutrino mass, which changes everything
Read More
The Wait Is Over: The Neutrino Revolution Is Approaching
Before the latest breakthroughs, energy researchers didn’t have enough information to counter the prevailing sentiment. The science pointed to one conclusion: The use of neutrinos is an impractical answer to the current energy crisis because we’ll never gain the capability to harness and convert them. Even if we did find
Read More
Neutrinos Stem the Tide of Disaster
Banks Will No Longer Finance Fossil Fuels Across the world, pressure to end mankind’s reliance on fossil fuels is starting to impact the financial world. On one side, further reliance on fossil fuels threatens humanity’s future, but quitting fossil fuels cold turkey could kill us all. In the midst of
Read More
Mainstream Neutrino Science is Catching Up
Superconductivity of trilayer graphene confirmed ​​In the world of superconductor engineering, heat has always been an issue. While reducing the energy loss of electrons moving through a material is ideal in power grids and other applications, existing superconductor technology must be operated at exceedingly high temperatures to deliver the desired
Read More
Neutrinovoltaic: Energy around the Clock from non-visible Radiation
Neutrino Energy – Neutrinovoltaic as the next logical Step after Photovoltaic In its early stages solar power also developed quite slowly. Although first implemented in 1958 for space travel, the 70’s saw the use of solar cells primarily in small-scale applications such as pocket calculators, and almost 20 years passed
Read More
Neutrino Energy in the field of space travel
Neutrino Energy will soon be opening up entirely new possibilities in the field of space travel The 69th International Astronautical Congress has just drawn to a close, and Holger Thorsten Schubart, CEO of the Neutrino Energy Group, felt very privileged to have been able to take part in this exciting
Read More 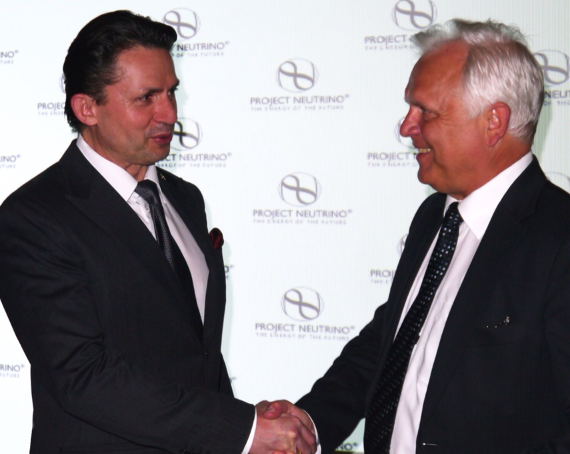 THE REVOLUTIONARY BREAKTHROUGHS REGARDING NEUTRINO RESEARCH
In the past, neutrinos have been ridiculed, referred to as ghost particles and doubted. The public is finally beginning to recognize neutrinos. The revolutionary breakthroughs regarding neutrino research have recently caught a great deal of attention at the Nikola Tesla Forum and in numerous media reports all over the world.
Read More

Neutrinos Could Solve The Energy Crisis
Imagine a future without the problems associated with fossil fuels. This could be a reality thanks to neutrino energy, and these are just a few of the advantages of this technology: This energy source can be accessed anytime, but this is not necessarily the case with fossil fuels. Neutrino energy
Read More
Latest Posts